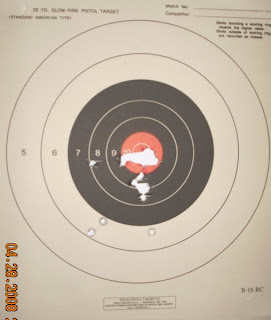 What we have here is one of the targets from the 38-Super shoot on Sunday. That's seventeen shots. Hmmm... I will have to work on my consistency.

I had one factory magazine and four Mec-Gar mags, all 17's. The first mag, the factory's, functioned flawlessly. As the shooting progressed with the aftermarket mags, there were more and more failures to feed until, with the last mag, nearly every single round (except the first) failed to feed. Then I reloaded the factory mag and tried it again and it, too, experienced failures to feed and stovepipes.

Well, I'm stubborn and I will make this gun reliable. It certainly is powerful and accurate.

And look on the bright side about the magazine failures: I got a lot of practice clearing jams, AND I was able to diagnose some of my shooting problems: anticipating recoil. That's why my "fliers" always "fly" to the lower left quadrant - because I often dip the muzzle when I pull the trigger.
Posted by Turk Turon at 9:39 PM No comments: 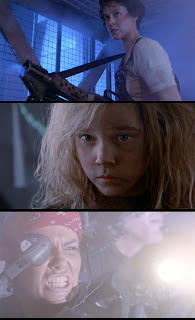 Marine: "Hey, Vasquez, has anybody ever mistaken you for a man?"
Vasquez: "No. How about you?"

Now that will make beer shoot out your nose.
Posted by Turk Turon at 10:46 PM No comments:

This Is A Real Book!

OK, that book meme; this volume was closest at hand from Le Biblioteca Turonistani:

"I don't know," she said. "I've never really been that fond of [see image]."
I tried to get her to talk more about this, but she wouldn't, except to say that she could never tell her family about any of this, at least not the [see image] part."

To prevent searchbots from tagging this blog as something it's not, I will let the visitor read the text from the photo below: 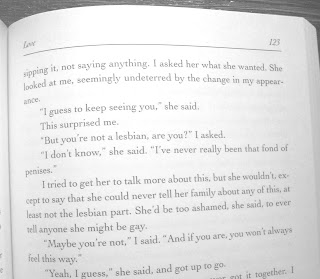 The book is "Self-Made Man" by Norah Vincent. 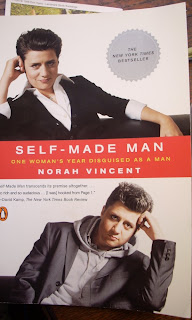 A very good read, by the way. The author is an [L-word], feminist, Manhattanite, journalist, so one would expect a certain, oh, shall we say, negative view of men? Au contraire! Her attitude, after a year of observing the world as a man, is something like, "Holy shit! I never dreamed it was this difficult! It's a harsh, cold world out there for men." ["The dears...." - Philadelphia Story, sorry]

I just got this broadcast email from the CMP:

AMMUNITION PURCHASE LIMIT: During the past 60 days we have experienced a ten-fold increase in orders for HXP .30-06 ammunition. This activity has significantly reduced our inventory. To ensure that the current inventory last another few years, effective immediately we are establishing an individual maximum purchase limit of ten cases of .30-06 HXP item # 407-Case and 10 cases of item # 415 per year.


Who is buying all that ammo, all of a sudden?
Posted by Turk Turon at 3:56 PM No comments:

This was fun! Try it, aging hipsters!

I scored a Far Out
90% on theQuiz by SheGoddess: Quick Weight Loss

(Does this quiz make me look fat?)
Posted by Turk Turon at 10:21 AM No comments:

EAA got the Witness kits to me in a hurry; they arrived last night: 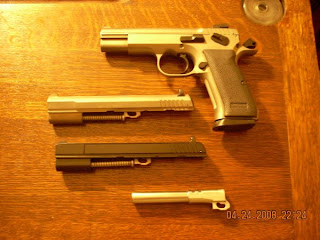 As you can see, the 9mm kit is blued, not Wondercoat finished.

And what you can't see is that the toggle on the 40 S&W barrel has a slightly different contour and will not smoothly go into battery.

I've got some emailing to do.
Posted by Turk Turon at 4:35 AM No comments:

Everybody's posting pix of their coffee mugs; here's mine. 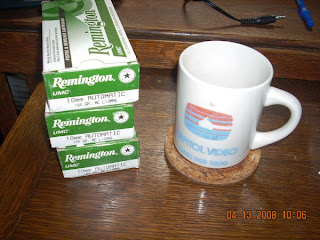 I had a 3-day pass to said event and arrived Friday before opening to stand in line for 45 minutes with my friend Jeff.
There was a huge and intimidating display by "Class 3 Only" from Roanoke of their machineguns. They had everything from a tiny .22 machine pistol up to a really stunning "Ma Deuce" 50-caliber machinegun on a tripod. There were over a dozen Thompsons, a dozen Uzis, an H&K MP5, and three or four BARs (jeez, those things are big!). Prices ranged from $3,000 to $40,000.
I saw a few Colt 1903 pocket pistols and a few Sauer 38h handguns, but none that whispered in my ear. The only modern gun that I was really interested in was a Tanfoglio/EAA Witness in 38-super. Ironically they had Witnesses in every caliber EXCEPT that! So after window shopping for two days I bought the 10-mm version. It was $370 plus $5 for the NICS check, so a decent deal. It came with one 14-rd mag, and I picked up two more from another vendor.
There were some pretty shotguns, including some Parkers and Foxes, but you have to be an expert in those things to get a good deal, and I'm out of my Shotgun Period.
I DID get a few non-gun items, like a Pelican waterproof box for my Blackberry. But the coolest thing I got was a three-box pack of phosphorous-tipped matches, the white-tipped kind that you can strike with your thumbnail, remember? Anybody old enough to remember Warren Beatty in "Bonny and Clyde" with a kitchen match between his teeth? Started a fad in my junior high school.
Posted by Turk Turon at 7:46 PM No comments: 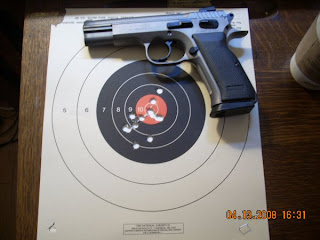 Here is the first target from the first firing of this new Tanfoglio/EAA 10mm pistol. It is quite the death ray. Not an unusual amount of recoil; it's a big, full-size gun with no "alloys" or light-weight material. It is all steel. The 10mm variety has 14-rd magazines.

I fired 100 rounds and had five failures-to-feed. No other stoppages. I used 180-gr FMJ by Remington/UMC and another smaller brand, um... shouldn't have thrown away the box. No problem. Even the best pistols sometimes have a break-in period. Time will tell.

I shoot this gun better than most any I have ever used. I used Roberta's 38-super in February and I just thought it was outstanding, so I made up my mind to get one for myself at the gun show in Dulles this weekend. They didn't have a 38-super, but no problem, you can buy slide/spring/barrel kits for 38-super and 9mm. And for .40 S&W a drop-in barrel is all that's needed. So I'm looking into converting it to all three calibers. That might be interesting.
Posted by Turk Turon at 4:36 PM 3 comments: