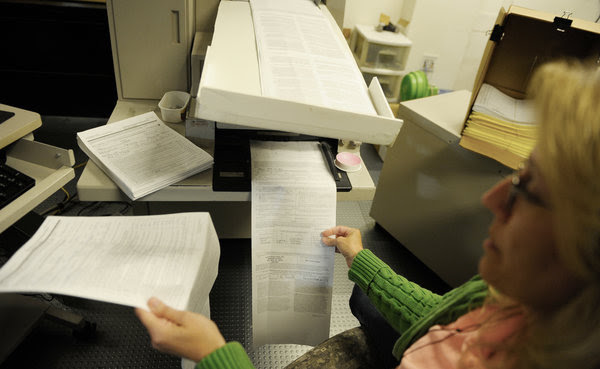 Caption: "Cindy VanDyne scanning records from a gun retailer in 2010 at the A.T.F.’s National Tracing Center in Martinsburg, W.Va" 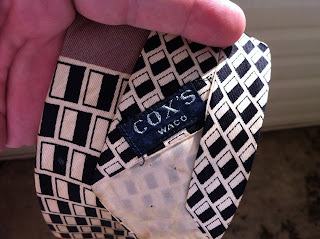 Had only the option of leaving a voicemail on Speaker Boehner's line.

Minority Leader Mitch McConnell's line was busy; tried it twice and couldn't get through.
Posted by Turk Turon at 10:02 AM No comments: 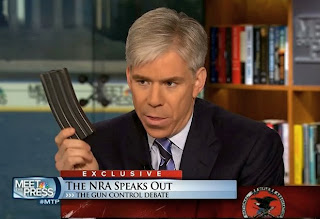 “We're in the District of Columbia right now, and possession of that magazine is illegal, even if it's not loaded. Even if it's not connected to a gun. It's still illegal. But you won't be charged, and do you know why? It's because you're white. If Ice-T was holding that magazine, he would be in jail before this program was off the air.”

- I made that up, but wouldn't it be great if life were really like that?


ETA: I just realized that Matt G had a similar thought before I did. Hell, I'm gettin' old.
Posted by Turk Turon at 6:39 PM 1 comment:

According to some news reports, "universal" background checks are the "low-hanging fruit" in Congress right now. There is unlikely to be a new Assault Weapons Ban; magazine limits are also unlikely to pass. But there is a chance, they say, that a law may be passed to require federal background checks on private sales, except between family members.

But what is the point in requiring universal background checks against a database that is missing millions of names, as the Wall Street Journal points out:

Contributions to the database have since been sparse, because of privacy laws, technological hurdles and the costs of reporting, according to a July report by the Government Accountability Office.

Just 12 states account for the vast majority of the mental-health records in the national database, the GAO found, "and most states have made little or no progress in providing these records." 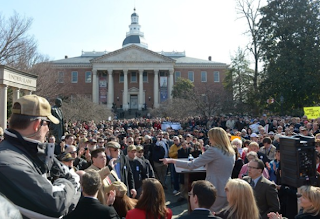 There was a huge turnout to protest Gov. O'Malley's gun control bill yesterday. Maryland already has some of the toughest gun control laws in the country.

Even the WaPo said it was a big demonstration:

Gun rights advocates marshaled one of the biggest crowds to descend on Annapolis for a bill hearing in years Wednesday, packing the halls of the Maryland State House complex to oppose Gov. Martin O’Malley’s plan to institute some of the nation’s strictest gun-control laws.

Outside the State House, opponents of O’Malley’s plan made it clear that he would be in for a battle. Many adorned their clothing with “Guns Save Lives” stickers and lined up to sign petitions against the bill. Placards bounced to the rhythm of speeches. One woman held up a cardboard sign that said, “When the people fear their government, there is tyranny.”

Kelly Cook, 23, a college student from Arnold, held up a sign that said: “Why do you want to fingerprint me? I am not a criminal.”

“That’s what I want to ask Governor O’Malley,” she said.

More than four hours into the hearing, a Connecticut-based lobbyist for the gun industry drew the most heated reaction from the Democratic-controlled panel.

“The restrictions in this bill are arbitrary. Nothing in it will prevent another Newtown or Columbine,” said Jake McGuigan of the National Shooting Sports Foundation, based in Newtown.

“You’re coming from Newtown, Connecticut, to tell us an assault-weapons ban would not save lives?” asked Sen. Brian E. Frosh (D-Montgomery).

Like others from the gun industry, McGuigan did not back down. He stressed that Connecticut has an assault-weapons ban and that the guns used in the shooting that killed 20 students there were legally owned by the killer’s mother.

With regard to Maryland, McGuigan cited homicide statistics from 2011 that showed just two of nearly 400 killings statewide were committed with rifles that could be banned under O’Malley’s legislation. Outside the hearing, the crowd in an overflow room applauded at the response.

Jeffrey Reh, general counsel for firearm manufacturer Beretta, which has a plant in Accokeek, warned lawmakers that O’Malley’s bill, which outlaws 45 types of weapons and their knockoffs, could have a severe impact on the company’s business. He also said that because gun manufacturers in Maryland are required to register as firearm dealers, it’s unclear whether the company would still be allowed to export guns for sale in other states.

“We’re confronted with a state government that wants to ban the products we make,” Reh said. “Not surprisingly, we are concerned.”

And more women (and girls, too):

Hope Ingraham of Gaithersburg said she doesn’t own a gun but brought her 9-year-old daughter, Zahira, to the spectacle because she thinks that constitutional rights should not be infringed upon.

“I used to be really anti-gun until [Hurricane] Katrina and I watched all of that Superdome stuff,” she said, “and that’s when I realized — the government lacks the ability to protect us when we need it most.”

After six hours waiting to testify, Athena Andrzejewski of Ellicott City was told that she would not be called before the hearing would be adjourned at 9 p.m.

“I expected a big crowd but not this big,” Andrzejewski said. “I’m glad it’s this big. It means we’re not just going to take whatever comes. It means we are going to fight.”

I Felt A Great Disturbance In The Force... 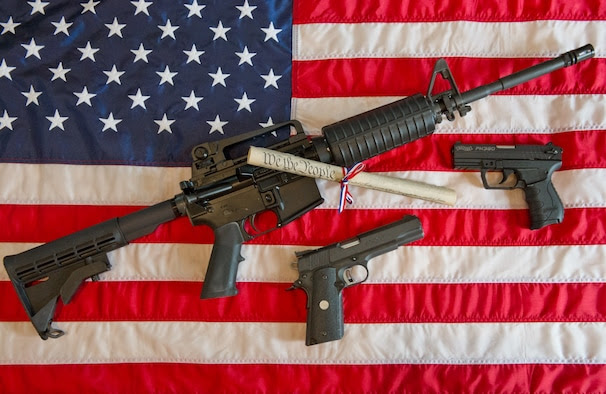 ...as if a million gun-control advocates suddenly cried out in terror and were suddenly silenced.