Middle-aged man in suit is complaining to young woman in green apron and black baseball cap.

Caption: "This is a helluva way to run a coffee shop! You call this a decent download speed?"

Sent from my iPhone
Posted by Turk Turon at 12:25 PM No comments:

I have assigned myself a winter project this year, namely to install a very accurate scope on an AR-15 flattop with a floating bull barrel, 9:1 twist, etc.

But before I do too much damage, I wanted to try a smaller-scale, less expensive project first.

So I'm going to install a Leapers scope on a Marlin Papoose.

Yeah, I know, it has a detachable barrel, so how accurate can it be, at best?

But that's not the point. The point is to learn how to use the tools.

The rings are Burris Signature .22 Rings, medium height. I also have one of their "Pos-Align" insert kits with the eccentric ring inserts. 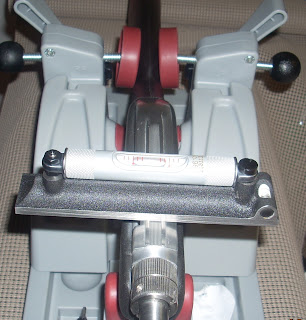 That's probably overkill, as far as a bubble level is concerned, but it is extraordinarily sensitive. It took me nearly 15 minutes to level the gun.

Then I put the Wheeler barrel clamp level on and adjusted it to agree with the Starrett. 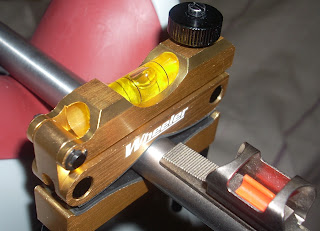 It's actually a nice piece of gear. All the images on the web make it look like it's made of yellow plastic, but it's anodized aluminum.

Now the Starrett is removed and the scope rings attached to the receiver. 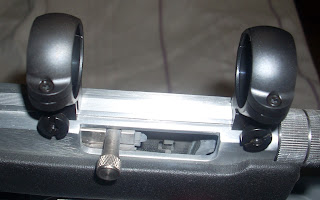 I didn't bother to degrease these rings, because, come on! But I will do it on the final project. These rings have Torx screws.

And now here's the star of the show. You can see the inserts in the rings. These are the concentric inserts that came with the rings. 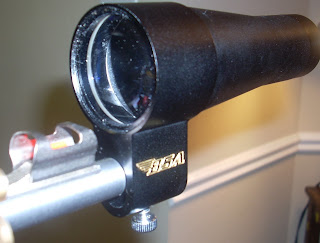 And here is the BSA collimator. The .22 spud doesn't fit very well. 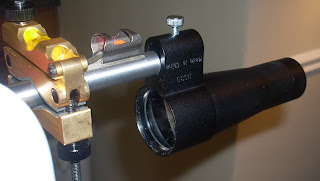 And it used to spend most of its time on the gun in this position. There are lots of complaints about this boresighter on the web. 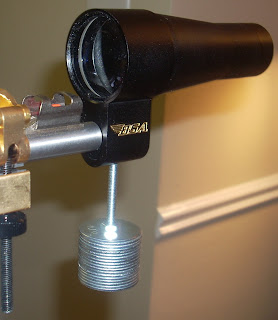 But a quick trip to the hardware store provided the answer.

I checked the scope reticle centering using the bathroom mirror method. I wasn't too impressed with the other method of rotating the scope while supporting it by the scope tube; who says it has to be optically and mechanically concentric?

The first thing to do is to make sure that the scope is level against the boresighter grid, and that the gun is still level at the Wheeler bubble level, too. The Burris rings begin to grab the scope as soon as the ring screws begin to bite, and there's a long way to go to tighten it down. I tightened the ring screws in an x-pattern, one half-turn at a time, checking scope levelling frequently. 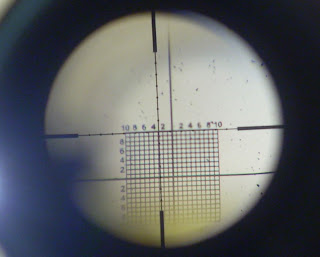 It was a slow, painstaking process to gradually torque down the four ring screws, and when I had all four screws tightened to 10 in-lbs, this is what I saw.

I got the level part OK, but that's damning with faint praise. Actually what I saw in the scope with my eye was that the scope crosshairs were 8 divisions (32" at 100 yds) high and two divisions (8" at 100 yds) to the left.

The rear ring was simple: put in a .020 ring with the thick side at 6 o'clock. That will lift the rear of the scope.

Here is the scope with the eccentric rings in place before the caps are added. You can see that the front ring has been rotated. I just eye-balled it to between 45 and 60-degrees.

Then I ran through the tedious process of torquing down the caps while checking that the gun and scope remained level. 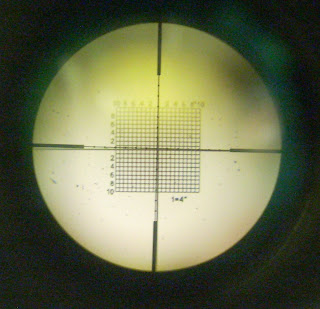 Looking through the scope I see that the windage is at 0 (centered) and the elevation is 1 unit high (4" at 100 yards). And I haven't touched the scope controls; they're still centered.

Now, of course, the proof of the pudding...

This is just a pilot project, but as far as the process goes I was pleased. And I was just blown away by the Burris Signature rings! I didn't expect them to work, but by golly they not only worked, they worked perfectly.

As you can see the scope has a Mil-dot reticle. One of my reasons for selecting it was to experiment with the Mil-dot ranging system in an inexpensive way.

And I found that there are 16 clicks between collimator grid divisions, elevation and windage, which comes out to about 1/4 MOA per click. (HA! like that's going to make a difference!) Well, we'll see. 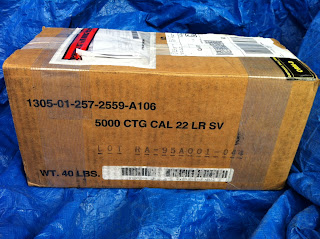