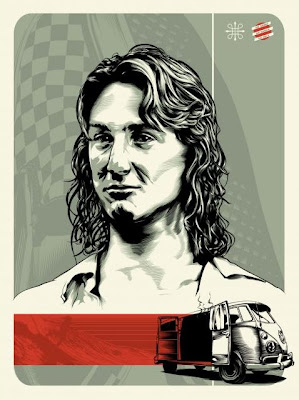 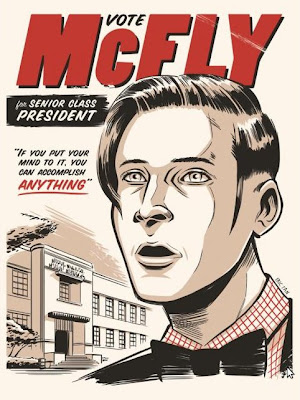 "Vote McFly" from "Back To The Future"

1) Standard & Poor's has already told the Treasury that even if the debt ceiling is raised, odds are 50-50 that they will reduce the rating of U.S. Treasury notes from “AAA” to “AA+” within three months. Reason: the current level of federal borrowing at a rate of 40 cents of every dollar of federal spending is unsustainable.

2) Forty-seven percent of American households paid no federal income tax at all in 2009.

3) Entitlement income is now 18% of total personal income in the United States and wages account for 51%.

There is a wonderful, pithy saying that is often wrongly attributed to Benjamin Franklin: “Democracy will last until a majority of the people discover that they can vote themselves largess from the federal treasury at the expense of the minority.”

The federal government is poised on the brink of a financial "death spiral".

What's going to happen when the ex-millionaires begin to show up at homeless shelters and food banks?
Posted by Turk Turon at 11:57 PM 4 comments:

It Was A Dry Heat 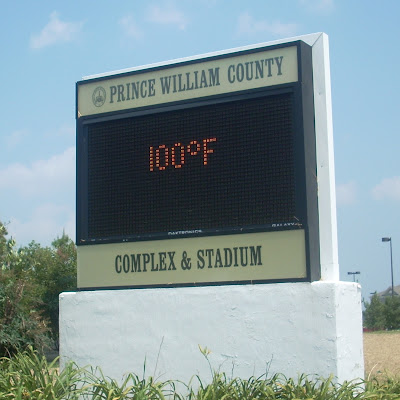 I went on a 25-mile bike ride today in the middle of this scorcher. It was 90 degrees at 11 AM when I started, 95 at noon and the high was 97 at 3 PM. But I took this snapshot at 1 PM... local temps were a bit higher. Riding on the sidewalk next to the traffic was like breathing from a blow-dryer. I took a Camelback canteen full of ice and water and today I used it all; first time for that. 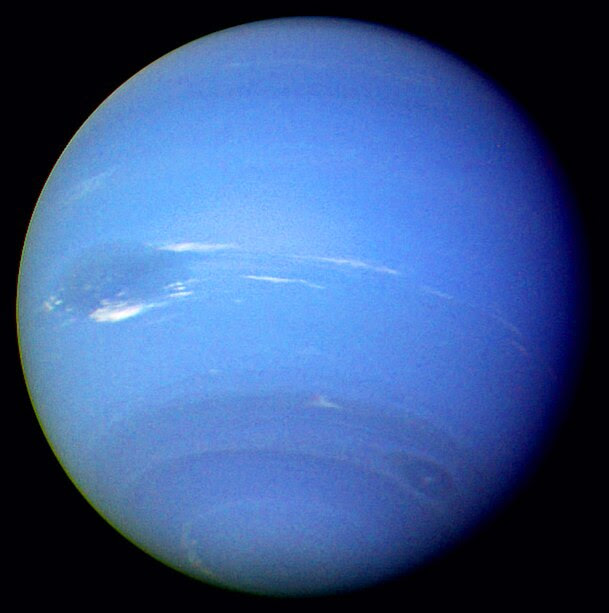 Today the planet Neptune completed its first orbit around the sun since it was first observed on September 23-24, 1846. 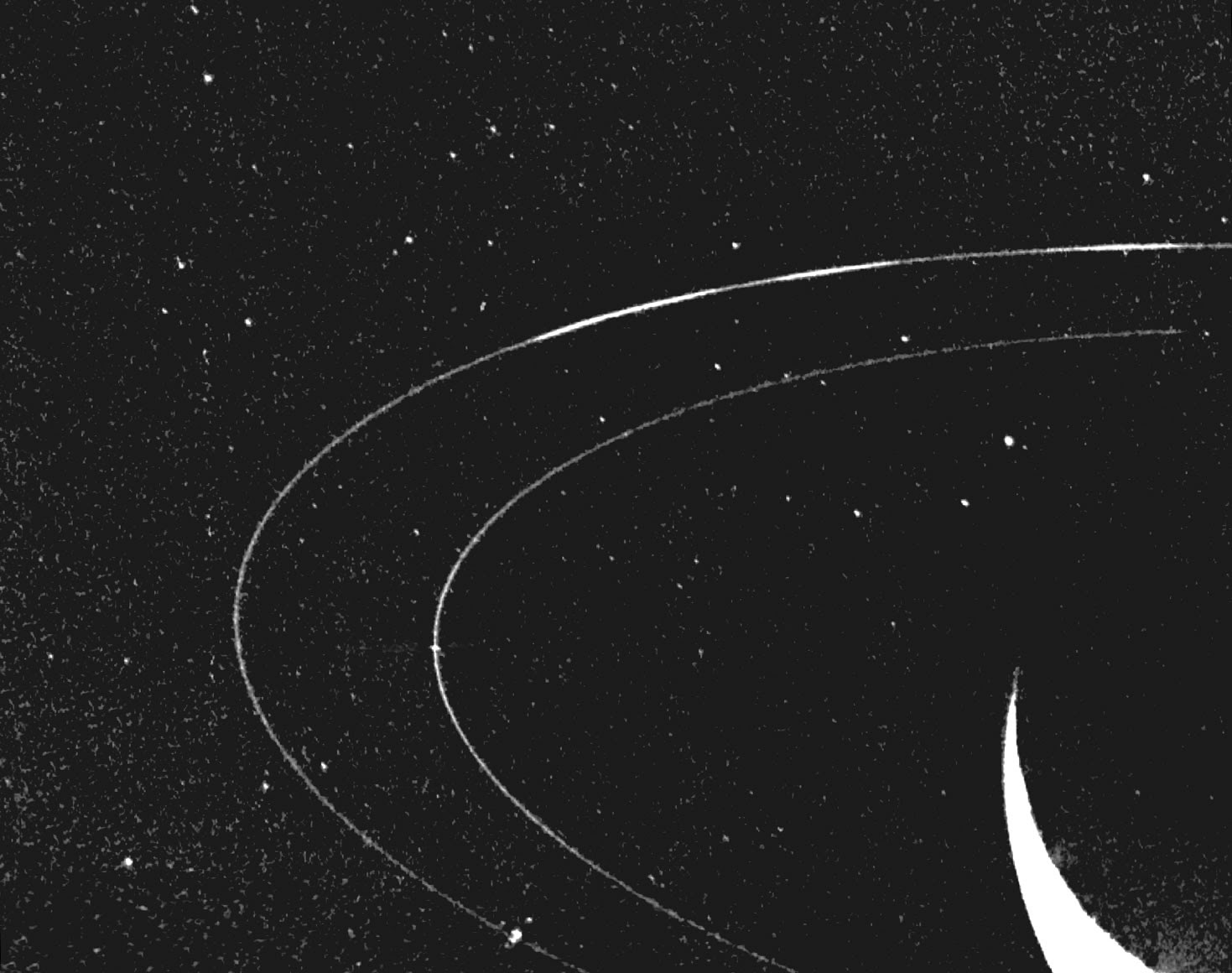 For several months, the only FFL in the District of Columbia, a man named Charles Sykes, has been without a business location, having lost his lease. He has been unable to find a new lease.

Sykes said Thursday that city regulations have made it very difficult for him to find a new place of business. Zoning rules demand that he locate no closer than 300 feet from schools, libraries or certain other landmarks.

“I wish the District would assist me more with trying to find an office,” he said. “I’m just a little disappointed that I’m not getting any encouragement or support.”

Sykes says he has proposed several addresses to the city, but to date they have all been rejected. “I thought [finding a location] was going to be the easy part,” he said. “This has been a stumbling block.”

He said he has no estimate on when he might return to business.

While Sykes’s business in on hiatus, D.C. residents have been prevented de facto from buying guns, which has opened the city to lawsuits. In late May, Virginia lawyer Alan Gura sued the city in Alexandria’s federal court on behalf of three District residents who have purchased guns legally but are unable to transfer them into the city.

So D.C. City Council is considering a bill to allow the city government to operate as an FFL.

In Ezell vs Chicago, the U.S. Seventh Circuit Court of Appeals reversed a lower court decision and instructed the lower court to issue an injunction to prevent Chicago from banning private indoor pistol ranges within the city limits. Interesting that that there are already eleven pistol ranges in Chicago: four federal, five CPD and two for private security guards.

Some excerpts from the decision, and it's a doozie:

The City urges us to import the “undue burden” test from the Court’s abortion cases, but we decline the invitation. Both Heller and McDonald suggest that First Amendment analogues are more appropriate, and on the strength of that suggestion, we and other circuits have already begun to adapt First Amendment doctrine to the Second Amendment context...

As the record comes to us at this stage of the proceedings, the firing‐range ban is wholly out of proportion to the public interests the City claims it serves. Accordingly, the plaintiffs’ Second Amendment claim has a strong likelihood of success on the merits.

Properly regulated firing ranges open to the public should not pose significant threats to public health and safety. On the other side of the scale, the plaintiffs have established a strong likelihood that they are suffering violations of their Second Amendment rights every day the range ban is in effect. The balance of harms favors the plaintiffs.

The plaintiffs asked the district court to enjoin the enforcement of Chicago Municipal Code § 8‐20‐280—the prohibition on “[s]hooting galleries, firearm ranges, or any other place where firearms are discharged.” They are entitled to a preliminary injunction to that effect. To be effective, however, the injunction must also prevent the City from enforcing other provisions of the Ordinance that operate indirectly to prohibit range training. The plaintiffs have identified several provisions of the Ordinance that implicate activities integral to range training: CHI. MUN. CODE §§ 8‐20‐020 (prohibiting the possession of handguns outside the home), 8‐20‐030 (prohibiting the possession of long guns outside the home or business), 8‐20‐080 (prohibiting the possession of ammunition without a corresponding permit and registration certificate), 8‐20‐100 (prohibiting the transfer of firearms and ammunition except through inheritance), 8‐24‐010 (prohibiting the discharge of firearms except for self‐defense, defense of another, or hunting). To the extent that these provisions prohibit law‐abiding, responsible citizens from using a firing range in the city, the preliminary injunction should include them as well. Similarly, the injunction should prohibit the City from using its zoning code to exclude firing ranges from locating anywhere in the city.

Finally, because range training is required for the issuance of a Chicago Firearm Permit, a registration certificate, and ultimately, for lawful possession of any firearm, the firing‐range ban implicates not only the right to train at a range but also the core Second Amendment right to possess firearms for self‐defense. Accordingly, the preliminary injunction should include sections 8‐20‐110(a) and 8‐20‐140(a) to the extent that those provisions operate to prohibit otherwise eligible persons from “carry[ing] or possess[ing] a firearm” at a range without a Permit or registration certificate while they are trying to complete the range‐training prerequisite for lawful firearm possession.

Those are the bounds of the proposed preliminary injunction, which should be entered upon remand.

Stung by the result of McDonald v. City of Chicago, 130 S. Ct. 3020 (2010), the City quickly enacted an ordinance that was too clever by half. Recognizing that a complete gun ban would no longer survive Supreme Court review, the City required all gun owners to obtain training that included one hour of live‐range instruction, and then banned all live ranges within City limits. This was not so much a nod to the importance of live‐range training as it was a thumbing of the municipal nose at the Supreme Court. The effect of the ordinance is another complete ban on gun ownership within City limits. That residents may travel outside the jurisdiction to fulfill the training requirement is irrelevant to the validity of the ordinance inside the City. In this I agree with the majority: given the framework of Dist. of Columbia v. Heller, 554 U.S. 570 (2008), and McDonald, the City may not condition gun ownership for self‐defense in the home on a prerequisite that the City renders impossible to fulfill within the City limits. The plaintiffs have a strong likelihood of success on the merits of that claim and the district court should have granted an injunction against the operation of the ordinance to the extent that it imposed an impossible pre‐condition on gun owner ship for self‐defense in the home. There are two obvious ways for the City to remedy this problem: it may either drop the requirement for one hour of live range training or it may permit live‐range training within the City limits.

h/t to Days Of Our Trailers and Of Arms And The Law.
Posted by Turk Turon at 4:18 PM 2 comments: 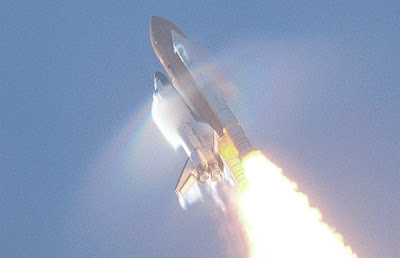 A collection of beautiful and unusual pictures of the Space Shuttle, in The Atlantic.