Saturday I went to the legendary Indianapolis 1500 gun show with Roberta X and Tam. 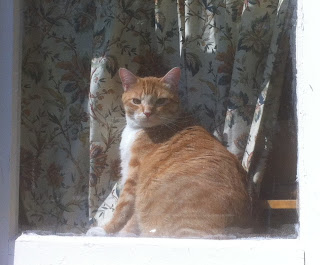 Huck The Miniature Broadripple Biting Tiger had to stay home; he was not happy. 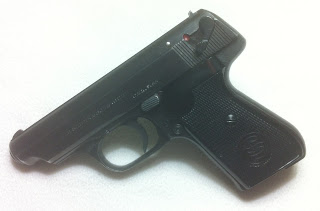 I was looking for a Sauer 38h, a nice little German pre-war 32-ACP pistol, and I think I got the nicest one at the show. 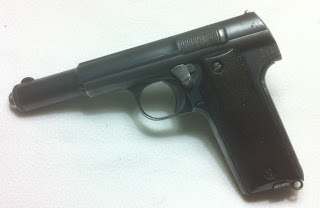 And there was even enough left over for an Astra 600 in 9mm Parabellum. With two of their rather eccentric magazines, yet!

So Sunday we were at the Eagle Creek range bright and early. The Astra was tested first. I checked the safety, loaded a full mag (mistake!), pointed downrange and released the slide.

It loosed off three rounds then stopped. With the safety ON.

With Roberta and Tam watching carefully, I loaded a single round into the magazine, checked that the safety was ON and released the slide.

We tried one more test to catch and examine the ejected casing: it had a nice symmetrical primer strike, and no signs of out-of-battery fire.

After the blogmeet Roberta disassembled the Astra. She inspected and cleaned the firing pin, spring, and follower. All appeared undamaged and in good order. She reassembled the gun and we used snap-caps with a little "dot" of "shoot'n'see" paper on the base, where the primer would be. We released the slide on this snap-cap and got a firm firing pin impression in the paper. We did it again with the same results.

So it's off to the gunsmith tomorrow.

The Sauer is a model of Teutonic order by comparison and shoots well. The single-action trigger pull feels a little light for my taste. Roberta X remarked on it, too. It feels like only about five pounds or so. But it has a stripped grip screw, so it's going to the garage, too.

Did it really go budda-budda-budda? I know that automatic weapons in my old Sgt. Fury comics made that sound, but...really?

Nice acquisitions though! Please let us know how it turns out with the gunsmith.

Well, to be absolutely technical about it, it was "budda-bu..." and then it choked.

Now I'm going to be going around saying budda-budda-budda all day long.

I have an Astra 600 and if the trigger in yours is like mine maybe you should have the trigger fixed while it's at the'smiths. Mine takes two fingers and a thumb to fire.

Many years ago, when my father learned that I had somehow wrangled a Massachusetts License to Carry Firearms and belonged to a gun club, he brought out his war trophy "ac44" marked Walther P-38 to try out. Loaded up a full magazine, and managed to fire all rounds with only one trigger pull. Detail strip and clean followed, then testing at the range. Problem gone. when I asked him if he had ever detail stripped and cleaned it, he said that he had not. When I asked him whether it had given him any problems, it had fired a double round fifteen years earlier when he had last fired it. When I told him what had happened, and that I had corrected the problem, he told me to hang on to it.

I have fired it once since. For a better 9mm, I bought a SIG P228 - twice the capacity for the same weight.