It's The Economy, Girlfriend! 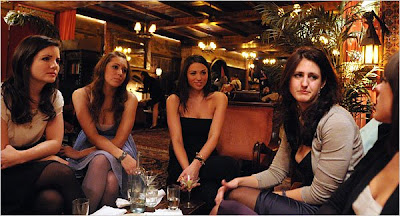 The economic crisis came home to 27-year-old Megan Petrus early last year when her boyfriend of eight months, a derivatives trader for a major bank, proved to be more concerned about helping a laid-off colleague than comforting Ms. Petrus after her father had a heart attack.
For Christine Cameron, the recession became real when the financial analyst she had been dating for about a year would get drunk and disappear while they were out together, then accuse her the next day of being the one who had absconded.
Dawn Spinner Davis, 26, a beauty writer, said the downward-trending graphs began to make sense when the man she married on Nov. 1, a 28-year-old private wealth manager, stopped playing golf, once his passion. “One of his best friends told me that my job is now to keep him calm and keep him from dying at the age of 35,” Ms. Davis said. “It’s not what I signed up for.”
They shared their sad stories the other night at an informal gathering of Dating a Banker Anonymous, a support group founded in November to help women cope with the inevitable relationship fallout from, say, the collapse of Lehman Brothers or
the Dow’s shedding 777 points in a single day, as it did on Sept. 29.

In addition to meeting once or twice weekly for brunch or drinks at a bar or restaurant, the group has a blog,
billed as “free from the scrutiny of feminists,” that invites women to join “if your monthly Bergdorf’s allowance has been halved and bottle service has all but disappeared from your life.”

There's more! (If you can stand it.) From the NYT.