Last Sunday was a long day. I got up at 2 AM, and left work at 11:30 AM. Drove down to Richmond; Glen Allen, actually. There is a wonderful gun shop called Green Top Sporting Goods. It's kind of an old-fashioned country gunshop, but a big one. Hundreds of long arms, old and new, reloading supplies, etc. Nearly a complete inventory of just about anything you could want for shooting. Over the years I have bought a Springfield M1A and a Beretta 20-gauge O/U there.
But when I was only a mile from Green Top I saw something new: a mammoth Bass Pro Shops store. It's sort of a Walmart Supercenter for hunting and fishing gear. Everything from boats to bullets, and even an on-site restaurant. I went in to have a look around and the firearms section was packed. The handgun counter was jammed; customers standing two and three deep. The ammo shelves were thoroughly picked over and only a few scattered boxes remained.

With such a huge crowd at this new superstore, I was worried that Green Top may have been driven out of business, but no! When I got there it was also jammed with eager customers. The Gun Culture is alive and well in Richmond, Virginia! I spotted a Kimber Ultra CDP II in the display case but it was half an hour before I could get waited on. It was the last one they had. I also got 300 rounds of Remington-UMC 230-gr. There was only one magazine with the gun so I ordered a Wilson Combat and a Chip McCormick mag from Brownell's and they arrived only four days later. 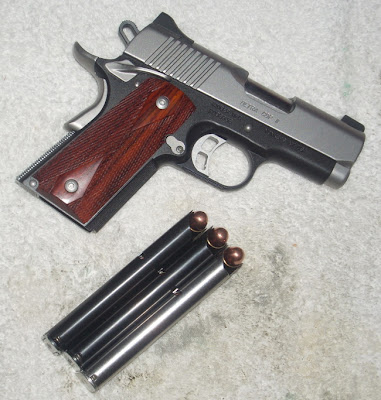 The Ultra CDP II is a 1911-pattern pistol in 45-ACP with a 3" bushingless barrel. The frame is machined from a solid billet of 7075-T7 aluminum, then anodized black. The slide is stainless steel. Weight with an empty magazine is 23 ounces. The recoil springs are captive on a 2-piece concentric guide rod, so it requires a little paperclip-like tool to disassemble. The "CDP" means "custom defense package" and it's like a basic Kimber with all of the custom work that a typical new owner might send out a new carry gun to have done: trigger job, ambi safety, de-horned and tritium night sights. 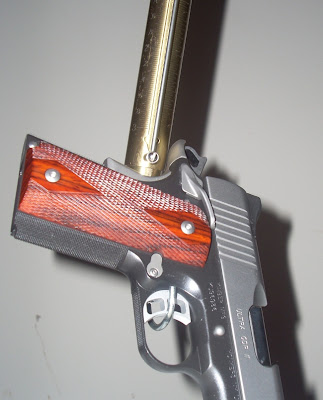 I measured the trigger pull with an old-fashioned Chatillion recording scale: the trigger has a pull of only four pounds; that's a bit startling the first time! 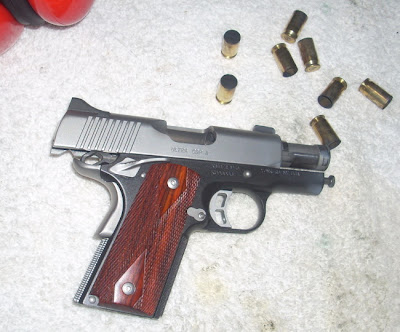 So it looks like I will have to get more of the Chip McCormick mags. They work very well with this gun, even better than the Kimber factory mag included with the gun. 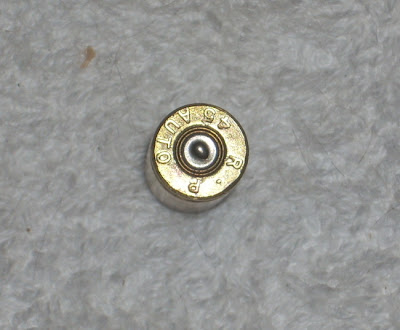 Very nice, symmetrical firing pin strikes on the primers, too.

I think I'll keep it.

Bumped into your Blog while on a search! Nicely done.

I'm curious, why do you think there was a failure to feed so many times with the last round? Quite frankly I'm a little disturbed that a quality arm is doing that. First round or last, they are all potential life savers.

What do you think might be the problem? Magazine follower angle?

I only have guesses: maybe the magazine follower was touching the slide stop prematurely?

All three of the mags have different follower designs. The Kimber follower even has a "fender" on the front face that prevents the follower from tilting. And all three mags are "officer" sized mags with a 7-rnd capacity. I'll keep experimenting; maybe get some 6-rnd officer-size mags and try them.

Maybe it's a "break-in" issue that will just disappear after 500 rounds.

Nice gun, tho'! Fantastic trigger, and seems to shoot where I point it.

No idea on the failure to fire/feed, but I'm sure it will work out.

Yes, give the six rounders a try and see if that solves the issue. Like you said, it might be a break in issue, though I've never had that be a problem. I just find it very strange that it's the last round, and they all stove pipe. That's why I think it's a mag problem.

Well keep us posted on your progress.

Did you lube the pistol before going to the range? I put a bit of grease on the slide stop. I've had this type of problem when the slide stop gets dirty or gunked up.

I started having this problem in the middle of an IDPA match. I was able between strings to pop out the slide stop, wipe it clean and back into the Kimber. No more FTFs on the last round after that.